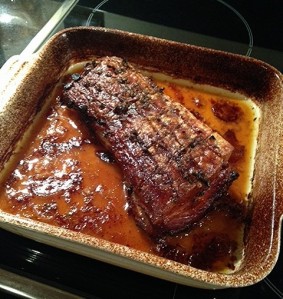 It’s the first bank holiday weekend I’ve spent in London in years. And I wasn’t too pleased about it. Often a weekend in London for me consists of eating / drinking too much one night and then spending one or two days recovering on the sofa getting annoyed that I’ve wasted the weekend!

So I was determined to not waste this weekend. A couple of middle-aged trips to Peter Jones and a garden centre were on the to do list as well as a run – which I actually did shockingly. Then food, drink and rest. All of which happened as well. As did an entire morning lying on the sofa with the mother of all hangovers. Last night, having been for a run, had a healthy brunch and wondered around town a bit I needed to cook something. I defrosted a pork belly and avoided cooking it for most of the weekend, but the fridge was bare to it was pork belly or nowt.

I vaguely followed a BBC Good Food recipe but didn’t have many of the ingredients so here’s my version. I should warn you in advance this recipe takes 3 ½ hours to cook and really shouldn’t be rushed – so it’s a lazy Sunday afternoon job. Oh and it smells amazing for the entirety of those 3 ½ hours! 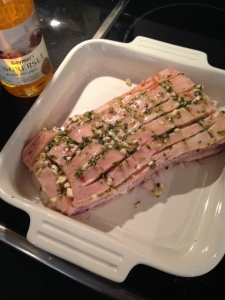 Although it took forever it was so delicious. The smell of the cooking throughout was fantastic and I was very worried that the taste wasn’t going to live up to the smell, but it did. Well worth a try as pork belly isn’t expensive and is quite often on offer in supermarkets.