So, you know when you have those days when you have a really productive week but you don’t have much to show for it. Website updates – let’s face it only I’ll notice those, lots of e-mails – again, only I know about those because my inbox has got a bit crowded again. And meetings; the ones that go on for longer than you planned but those ones that are productive and fun at the same time. During one of my meetings on Wednesday I mentioned I was in Easy Putney to accompany my best friend to her wedding dress fitting (she looked stunning and amazing and BEAUTIFUL by the way) and I didn’t know where to go for dinner, despite having lives there for 3 years and I was immediately told to go to Bibo. 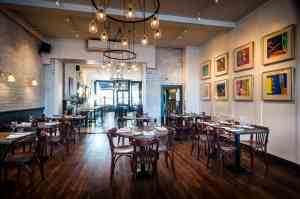 Sitting in an unassuming spot on the Upper Richmond Road, Bibo is a serious gem, flanked on either side by Pizza Express and Nando’s, the elegance and style of the interior has clearly been thought out carefully – I know that’s a stupid thing to say as everyone thinks about their interior carefully, but these guys obviously know what they’re doing.Over a glass of Prosecco we began to peruse the menu, it all looked so good!! The waitress kindly explained what n’duja, finocchiona and camone were as I had not the faintest idea, and we ordered. 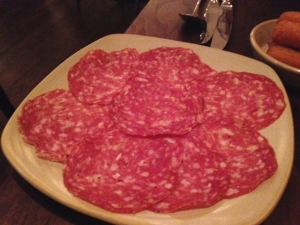 To start we had the N’duja crocchette, the and Camone and Marinda tomatoes, Caprini Freschi Pangrattato, all of which were fantastic. The crocchette were hot and rich and very moreish and a generous portion for £3.50 (reckon you’d only get half as many if you ordered the same dish in Soho). The Finocchiona; a salami with fennel seeds in it, was lovely, I’m not a fan of fennel or anything remotely related to aniseed but the flavour was quite subtle so suited me down to the ground. And the tomatoes with (I think) posh mozzarella were perfect, I love this kind of dish – yes, I can make it at home – and I would very rarely order it in a restaurant but it was just what was needed to accompany the salty richness of the other two dishes, lovely and fresh. I could eat it all day long! 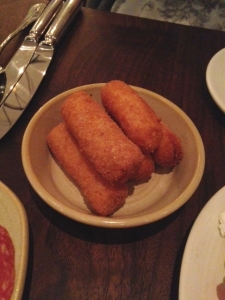 For main courses I had been told that their pasta dishes were all winners. I went for the tagliatelle with asparagus and creme fraiche and my friend had the pappardelle with beef ragu. If I’m completely honest, my tagliatelle was a slight let down, the pasta itself was good, but I seemed like it literally was just pasta, creme fraiche and asparagus – with Parmesan grated on top. It was lacking in seasoning and, well a bit of oomph, which was disappointing, given it was the same price as the ragu dish which was utterly divine! The pappardelle was perfectly cooked and had sucked up some of the beef flavour between being plated and brought to our table, the beef was melt-in-the-mouth good (I hate that phrase – sorry) but it was, with a little Parmesan grated on top, lovely seasoning and a rich tomatoiness that rounded off a delicious dish. And I got to have half of it as my friend insisted on swapping our dishes halfway through! Win! 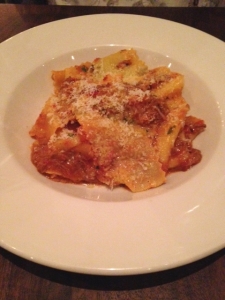 We couldn’t not have the Bombolini with Amalfi lemon curd, we were told by a friend that they were amazing and absolutely had to have them. I confess, I didn’t know what they were when we ordered. Mini Donuts!!!!! Cute, sugary, yummy donuts! My friend dug into the lemon curd but I didn’t need it. 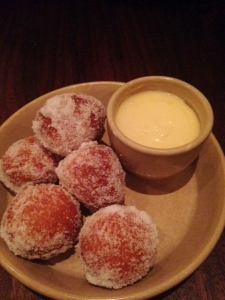 All that food, wine, wonderful service, lovely ambiance and our bill only came to £78 including service. Ok, it’s not the cheapest for a ‘quick dinner on a Wednesday night’ but it was worth every penny! Dinner in my local pub would come to more than that and you wouldn’t get nearly as much food! I hope this place does well, they are getting almost everything right in my opinion, I’d love it if it was my local, sadly it’s not so I’ll have to make the return trip again and again.

On a separate note, there was a wine evening going on in the back galleried area that looked fantastic, £49.50 for 5 courses and matched wines, and the food we saw going up there looked gorgeous – best book early, it was apparently their first one of their new Monthly Wine Dinners and it was pretty full up!