I have a new found respect for chefs. There, I’ve said it. I’ve never really understood the heat that one has to put up with as a chef. Obviously being surrounded by open flames, it’s going to get a little warm,  but in the summer the main pass at the place I used to work was baking, I never went there, I just stayed in the blissfully air-conditioned pastry section. A couple of weeks ago I flew out to France to do some cooking for an opera festival. My kitchen was tiny, there was not a hint of air-con and I was cooking lunch every day for 12 and doing a big party for 50. It was 26 degrees outside and 32 degrees inside. Wow, cooking all morning and most afternoons in that heat is almost unbearable,I don’t know how you chefs do it. Slightly random into, I know, sorry!

As soon as I landed back from France last week, I was in dire need of a good lunch, so I text my usual mid-week lunching companion and he suggested Notting Hill Kitchen. So after booking and spending 30 mins agonizing over the lack of fashionable kit in my wardrobe, off I trotted to super-trendy Notting Hill. I plonked myself at the bar waiting for my friend I was presented with a spritza which given the length of journey I’d had (Nice to Notting Hill) felt like the most refreshing drink on the planet!

Once sat down we attempted to decipher the menu, having never eaten fine dining Spanish / Portuguese so I did have to get the waiter to explain some of the dishes which he did in detail if slightly broken English. 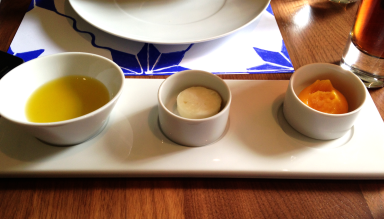 We shared 3 starters between us and ordered a couple of main courses as well. The Gambas which had been fried in olive oil and garlic were fantastic, I have no idea why or how as they were so simple, but oooh, they were very good! As soon as I saw broad beans as an option for a starter, I had to have that, having hated them as a child, now I can’t get enough of them (as long as they are double podded), they were glistening with sheep’s butter, a cured meat and a little tomato. The other starter of Pata Negra with bonemarrow and truffle oil, was also wonderful – I’m not a fan of bone marrow, but I was told it was ‘the proper stuff’ and ‘f***** good’. 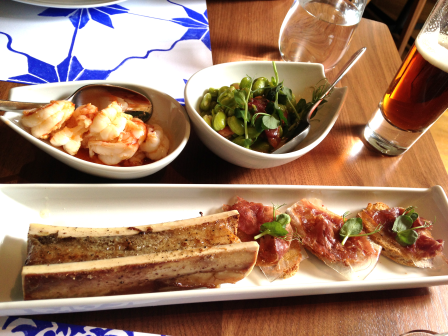 I went for the confit pork cheek with truffled extremadura ‘migas’ as a main course. I asked what extremadura ‘migas’ was and got told it was bread bits that had been fried. Indeed it was, although it was more on the breadcrumb side, so I did feel a little short changed. The pork was good, if a little tough on the outside, it was wonderfully moist once you got passed the exterior. 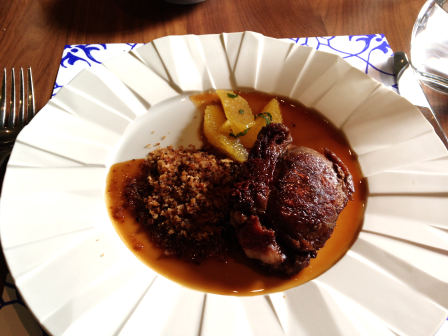 Having ordered the milk-fed lamb shoulder, my friend was informed that they didn’t have it, so he changed to an ox tail but with sauteed veg and potatoes which were the lamb accompaniment. I might add here, that were the only table in the entire place – it might have been helpful to know that one of the 6 main courses wasn’t available before ordering…? Anyhoo, the ox cheek arrived. It was big. It was rich. And it was sticky. So sticky in fact that it could have been used to re-tile a bathroom.

We also had the cauliflower miga with garlic and vinegar as a side – this was just plain odd. It was tepid and tasted more of vinegar than cauliflower. 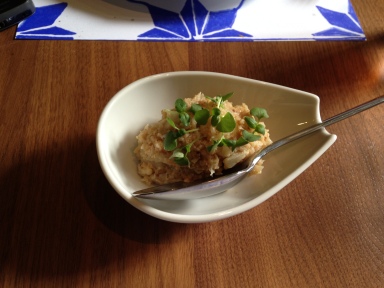 The bill wasn’t too eye watering. I’m trying to work out what has annoyed me about this place, afterall, I liked the decor, it’s in a nice area and the idea and concept sound great. Was it the fact that it was empty except for the Gerard Depardieu look-and-sound-a-like owner noisily bouncing around, or the fact that the starters were just so much better than the main courses or the fact that we just got it on an off day. It’s a mystery, in short, I reckon I’d go back and just work my way through the starters a couple of times.