I had a very British moment last night. I was sitting outside a pub waiting over 10 minutes for a beer to be delivered to our table – when it was delivered I smiled sweetly and thanked the waitress. Whilst at the same time I was being constantly bashed in the back by the group behind who couldn’t care less that they were taking up most of the seats and the pavement. Then having to wait a further 10 minutes for the bill for said beer only to stroppily march up to the counter to pay and realise they had forgotten to put it through. All this time, I of course, did nothing. I’m British; so I sat there clenching and unclenching my jaw and closing my eyes from time to time like a mother who has seen THAT episode of Pepper Pig one too many times and is willing herself not to shout / scream / pull all her hair out! We left that delightful watering hole and went 3 doors down to The Henry Root. What a relief, friendly, welcoming and helpful staff greeted us. It seems my strop was still with me slightly as I rather rudely ordered myself a glass of Chablis without a second thought to my companion who was fannying about on his phone. An error that was quickly rectified by a) ordering another glass and b) him putting down his phone.

To start with I had the asparagus with duck egg and truffle oil. Perfectly cooked with the ponsy shaved ends and everything. In my opinion it could have done with either a drop more of truffle or a tiny shave or two of Pecorino. The other starter of ham and seeded mustard terrine was lovely. A good portion as well, I was a little jealous.

Having decided I was definitely going to be healthy at dinner and definitely order the fish dish on the menu I of course opted for the Onglet with an extra pot of Bearnaise which they didn’t charge me for. It all tasted great. The chips in particular were really really good – I’m very partial to a good chip, can’t be doing with chunky ones and the stringy French fries are quite often dry. But these rustic little numbers that seem to have been roughly peeled were fab. 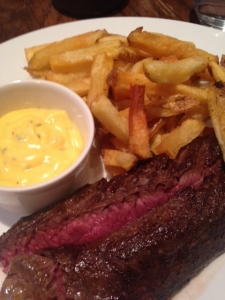 Pudding, not my favourite course in general but the sticky toffee pudding was delicious, although the sauce was a little too close to being burnt for my taste, it was a bit bitter. The homemade ice cream that came on top of the pudding was the best bit by far!

The bill came to just over £100 which is exactly what we were expecting for 2 ½ courses, a bottle of wine and a few extras. My only gripe, and it is the only thing, to be charged £1.50 for ‘filtered water’ is a bit cheeky. Come on, I don’t know any restaurants that do that – particularly without telling you – it was served in a china jug so I assumed it was tap water only to find £1.50 on the bill. Either give me filtered water for free – or charge me through the nose for bottled water like everyone else. Sorry, but that was annoying.

I can’t wait to go back to this place, excellent food and really lovely staff, they seriously helped get me out of the super strop that I was in when I arrived!