There are few places in London that are as decadent as Bob Bob Ricard. I happen to work in a very gilded and decadent restaurant, but one can’t eat there all the time can one! And whilst I’m going through this trying to be ultra cool phase – sad isn’t it – I though it only right to not only do cool but do posh and ridiculously showy off.
So it was off to Bob Bob Ricard I toddled with a friend. We didn’t have a reservation so opted to dine at the bar rather than wait an hour and half for a booth. I’m generally not a huge fan of bar dining – only for the pathetic reason that the seats are usually uncomfortable and my legs are usually too short to reach the foot rest on the stools, but all was fine at Bob, my stumpy little legs reached the rests and the stools were jolly comfy.
Aperitif of Rhubarb Gin & tonic for my friend and a Strawberry Sauvignon Twinkle for me (sorry but I’m not a fan of that name) it did taste lovely though!

To start I thought it only fitting that I try one of the Russian starters –  truffle potato & porcini vareniki, it was lovely and the crunch of the deep fried tiny shallot rings really made the dish. The three cheese soufflé had certainly risen to the occasion, it was beautifully light and cheesy. 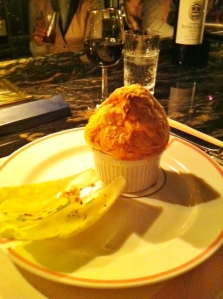 The three bird burger was my choice of choice. A patty of duck and guineafowl with a crispy boned quail on top all packed inside a brioche bin with game stuffing and some gorgeous chips. See? I told you! Decadence – at Bob Bob Ricard to put one type of bird in a burger isn’t enough, neither is two birds, but three… It was very tasty, in my humble opinion there was too much of the stuffing so I lost the taste often guineafowl completely behind strong orange and cranberry flavours. 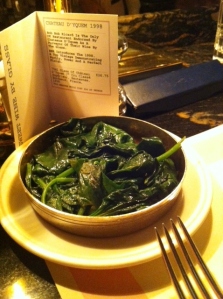 My friends crispy pressed belly of suckling pig was divine, gloriously rich and fatty while being crispy and full of flavour – wish I’d had more than one bite of that.
Dessert wasn’t going to happen as we’d eaten our fill sadly. It was still quite early so a digestif was in order. Whiskey for my friend and a glass of Pol Roger for me, not my usual choice of digestif, I did ask for some Poire Williams,  but they don’t stock it. I did find their digestif list for ladies slightly limited unless I just wasn’t given the right list by my friend.

It’s hard to dislike anything about Bob Bob Ricard. The staff are great, the service is top notch, food lovely, decor stunning. Oh and they have a button that says ‘Press for Champagne’ and it WORKS!!!! 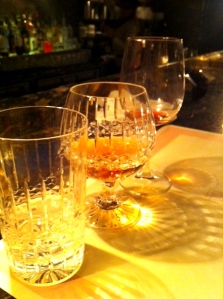