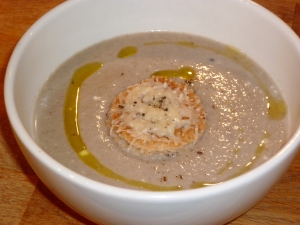 Brrrrrr…. Winter has most definitely set in. The motorway slip-roads are like ice rinks, TV reporters all have noses like Rudolph and I feel the beginnings of a blame game as to who didn’t order/make/magic up enough salt for the nation’s roads!

So, to cheer myself up I made one of my favourite meals the other night…. Wild Mushroom Soup. I had, as a child, some of the worst kind of mushroom soup forced upon me, cheap horrible stuff with enough cornflour in it to make it stand up and horrible mushrooms that ended up floating about like little slimy life-rings floating around in the atlantic. Apologies I’m not sure where I dreamt that analogy from! Then I came across Wild Mushroom Soup – I cannot remember where I had it (although I have a teeny feeling it was at L’Atelier at Joel Rebouchon a few years ago). It was dreamy – I had to try it. 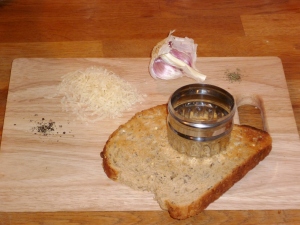 This a perfect midweek meal, it’s really quick and is relatively healthy. It also makes a good vegetarian starter (use veggie stock if you want to make it for vegetarians obviously) and the crouton makes it look like you’ve worked much harder than you actually have!!

Not as good as Joel Rebouchon, but I bet I used less butter than him!