Desperately trying to think up some amusing joke that goes with restaurants/eating out/curry/food in general and the Milliband of Brothers… But i just can’t – as they say in Twitter land #FAIL.

Bored of tacky patterned carpets, watery raita or that cloying curry smell that gets into your clothes? I think I’ve found the solution to everyone’s problems. The interestingly named Dishoom opened a couple of months ago and has welcomed hundreds of reviewers and critics through its doors (nearly all of the write ups have been glowing – I’m pleased to say). So, it’s my turn to jump on the bandwagon for this relaxed yet gourmet version of Indian food.

I popped in for a quick bite a month or so ago and wasn’t disappointed, no I mean it, everything was so easy, like ‘quick bites’ should be! You don’t want to have to think about starters, mains and desserts on a Wednesday evening (if you do that’s no problem either). This particular Wednesday evening, I was feeling hugely stressed out (important new job as an Executive don’cha’know…), bit peeved because my stupid bank told me I’d spent too much money on food and booze already that month, i was therefore late in turning up to meet the girls. What made my strop a little worse was the prospect of maybe not getting a table at this fancy new ‘Curry Cafe’ that I’d told them all about as they don’t take bookings. Thankfully the latter part of my strop evaporated as we entered this quirky eatery, when we were greeted by a very friendly lady who said it would be a couple of minutes (blood pressure more a little at this point). Two minutes later we were perched at a window table – thumbs up!

Our waitress quickly brought us glasses of tap water (last of the big spenders that we are!) and advised us on how we could go about ordering our food. We opted for the more traditional one dish per person with a rice each, some raita and a couple of naan. Even if i do say so myself – my choice of the ‘Ruby Murray of the Day’ was the best. The girls went for a skewer each with came out, if I’m honest, looking a lot smaller than I thought they were going to, and the presentation wasn’t going to win any Michelin Stars, but I was reliably informed by both girls that they were ‘stuffed’ (I’m sure they put it much more politely) and the sizes were perfect. My Ruby Murray arrived a little after their skewers (we were told that everything wasn’t necessarily going to arrive at the same time). I should mention that it was a chicken curry with the sauce slightly oddly described to me as ‘gravy’, bt hey – I’m from the North so I thought I couldn’t really go wrong with that. The size of it was perfect. The taste was really really good – I don’t want to use flowery adjectives to describe the taste as it would be pointless – it was just blooming brilliant. I should add, the sauce wasn’t ‘gravy’ it was a delightful tomatoey / (not too) spicey mixture that clung to the chicken, but left just enough to be mopped up with a naan! And, I know it’s only rice – but when was the last time you went to a curry house and didn’t have to plan how many rice dishes to share between 2… One dish each – easy! 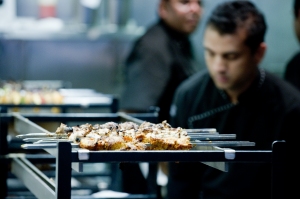 The naan that we had were sooooooo yummy – I don’t even want to think about how much butter was in and all over them but they were just, mmmm, yummy!
So, that was experience one! Pretty good verdict I’d say… Oh and it didn’t cost a fortune (did I already mention that??)

Experience 2, this was all through the wonderous world of Twitter (yes, I tweet (for those of you that don’t know that already)). There I was tweeting away pointlessly telling the world about my excitement for lunch when @DishoomLondon piped up and asked if I’d tried their Chicken Shorba, for those that ain’t in the know – Shorba is a fragrant broth with vegetables, spices and chicken in it (in a nutshell). I hadn’t tried it, but being the busy workaholic that i am, I don’t have time to sit in the restaurant and eat it, so I became the Dishoom takeaway guinea pig! Well well well…. what a treat this was, not only had a new and highly praised restaurant offered to make me a special takeaway lunch, but they saved the showman bit until I arrived. The head chef made me a Roomli-roti (a very thin bread – the thickness of a tortilla made with much the same excitement as a good pizza chef makes his bases) This was amazing, a ball of dough turned into a hot huge ‘handkerchief’ right before my eyes. The chef stretches the dough and places it over a dome-shaped ‘hot stone’ I don’t know what it was made of but it would have had to be something like stone to be that hot!! And this wonderful hot pancake thing is produced, then he folded it up into something the size of your average iPhone.

The Shorba – gorgeous. Again, I opened the pot and was a bit surprised a that it wasn’t full, but by the time I got to the bottom of the pot – I was very full. But also full of that warm fuzzy (but not sleepy) feeling you get when you’ve just had a really comforting meal that you know wasn’t actually bad for you.

I really ought to stop waffling, as this has gone on quite enough. I think you get my drift though?? Dishoom is a wonderful easy-going new addition to London’s vibrant restaurant scene. YOu don’t have to spend a fortune to have a good meal, you can be in and out in less than an hour (if you want to be), it’s central and the food is bloody good. It’s also got something that not a lot of Indian restaurants have, waiters and waitresses that know what they’re talking about (‘gravy’ bit aside) and are allowed to voice an opinion, we asked and were told what was our waitresses favourite dish!