It’s that time of year again when Pete comes over from Hong Kong and we have the perfect excuse to a posh dinner out – not that I ever need an actual excuse. Last time we did Quaglinos and the time before was Langans and the time before that was a cottage pie I had let quietly cogitate on the hob for about 3 hours topping up with red wine and tomatoes every now and then. So you get the idea; rich and classic food was to be the order of the day. 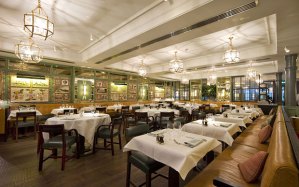 I failed to get a table for the soft opening of the Ivy Chelsea Garden and following the Daily Mail photos of Kris Kardasian, Piers Morgan and Michael Caine eating there I figured I wouldn’t get a table if I booked under 24 hours in advance – apparently not – booked straight in at 7.15. Arriving early (yes, early) I propped myself  up at the bar with a voddy & tonic, The Times and people watching (Hugo from MIC and Sol Campbell to name but a few). I’ll not bore you with the faff of getting through the door – which is just slow and tedious – but that is the curse of being in ‘Ladies wot Lunch’ territory, they take forever to actually get through a door as a group, so as a normal person you get stuck behind them because they take up so much space!

However, once seated water was ordered and eventually a bottle of white. My starter of mushrooms on toast was good, it had everything I required – mushrooms, cream, parsley and bread. I had exactly the same dish at Ivy Market Grill last December, it is what it is, good simple comforting starter. The smoked salmon and crab starter looked lovely, it was an enormous portion and I’m told the Shotted Pimps were also delicious with a good amount of Melba toast to get into the corners of the Kilner jar to scoop out those last bits of clarified butter.

For the main course I handed over the wine list and we up’ the anti the Chablis 1er Cru, Domaine Vrignaud ‘Fourchaume’ was wonderful, initially it was too cold but once warmed up a little was so smooth, if only one could afford to drink £60 a bottle wine all the time darling!
Not so smooth was my lemon sole. I wanted to change my order when I saw someone else’s arrive on the next door table but it was probably too late and I was too feeble to ask. What arrived was a good sized fish presented well with capers over the top, but dry. Overlooked and dry! Actually no, the fillets under the spine weren’t as dry because in a desperate attempt to gain some moisture they’d obviously sucked up whatever beurre noisette that the dish had been served with because I certainly didn’t see any on the plate when it arrived. I’m the first to admit I’ve been spoilt by all the wonderful fish (mainly sole) dishes in London and have been lucky enough to eat some incredible Dover or Lemon sole with beurre noisette. But this is supposed to be The Ivy – or at least its kid sister. Get it right! Send your fish chefs to dinner at J Sheekey or The Wallace Collection to try the soft buttery silkiness of a correctly cooked miracle that is Dover or Lemon sole. Problem is, I’m too bloody English, when asked how it was I just simpered and muttered ‘lovely thanks’. The fishcake across the table from me gave me serious food envy; it was huge with an oozing poached egg on top. And to cod fillet next to me was a proper girly dish, beautifully presented – a perfect light summery dish. 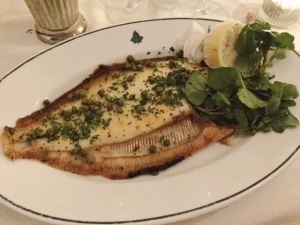 We did try a dessert or two – the Strawberry shortcake sundae was ridiculous – in a good way. Huge with plenty of strawberries and strawberry puree throughout. The photo I took was so rubbish that it’s not worth putting up.

So, whilst I’m glad I’ve been, as with its Market sister in Covent Garden I’m not sure I’ll make the effort to go back, at least for dinner. A weekend breakfast; I imagine is where this place will come into its own. After a couple of hours sleep the Chelsea party bunnies will waft in, chronically hungover but looking like they’ve been in the salon for hours and guzzle granola, fresh fruit salads, green tea and tomato juice with perhaps the merest hint of vodka. Bitter? Me?? Noooooo.

One thought on “The Ivy Chelsea Garden, Kings Road”