When you tell people you’ve just been to Bermuda there is one answer that everyone seems to give; so you didn’t get lost in the triangle then? No. I didn’t. I did, however, eat – a lot. Sailing, sun-bathing and scooting formed the rest of the holiday, oh and of course the rum.

I was extremely lucky to have been taken by the Boyfriend to a beautiful restaurant in Hamilton called the Harbourfront. It was our 3 year anniversary so, let’s face it; he had no choice but to spoil me rotten!

We had one of the highly coveted outside tables, it had been a gorgeous sunny day and of course, as soon as we sat down the sun went in, but we toughed it out for a while. After a hard day sailing, I’m not going to pretend we were pretty hungry, so we toasted ourselves over a glass of Champagne and demolished the homemade bread they put on the table as we sat down.

Rose was our wine preference for the evening – a habit we’ve picked up from many a skiing holiday in Meribel! We had been told that this restaurant was particularly known for its Sushi, so I went for the sushi sampler for my starter, while the Boyfriend went for the starter sampler – a small version of 4 of the a la carte starters. Presentation was perfect. My sushi was divine – there is something so wonderful about really fresh sushi and this was no exception, the sashimi was truly dreamy! The starter sampler was great, it was lovely to see some local produce as it is difficult for Bermuda to had an awful lot of local stuff given that it is so small! The Wahoo fish with the raspberry sauce was the best bit, oh actually the salmon tartar was, I can’t decide, the whole lots was scrumptious!

For mains I went for the black cod with jasmine rice, it had been marinading for ages. It was beautiful (apologies for the lack of imaginative adjectives in this post). If I had one criticism it would be that the stir-fried vegetables on top of the fish were a little unimaginative and tasted just a bit the same as any other veg stir-fry I’d have at home, but the star of the dish was the cod, the flavour was subtle enough to be there in abundance but not too much that you couldn’t taste the cod.

The Boyfriend went for the risotto, it was a mushroom one and when it landed on the table, my nose started to twitch in excitement – truffles. The risotto was laced with truffle oil – it didn’t mention this on the menu, fortunately he likes truffles but they are not everyone’s cup of tea so I do think they ought to be mentioned on the menu. 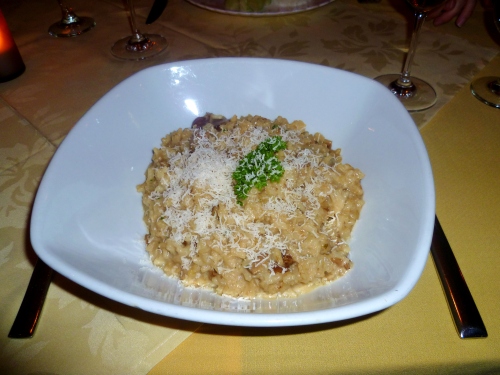 We were way too full for pudding so we went for a cocktail to wash everything down and I couldn’t resist taking a picture of it as I got my own little shaker! There is not a lot better than a well made Cosmopolitan.

We went to loads of different restaurants – so I’m afraid there may be a couple more mouth-watering reviews coming up!