It’s London Restaurant Week and I’m on a diet. Hmmm, which do we think will win; the gym or the LRW discounted menus? Well, you didn’t have to think that hard did you? So it was to Foxtrot Oscar we went last night.
I have always wanted to go to this place, with a name like Foxtrot Oscar who wouldn’t want to go! It’s also, rather shamefully the first restaurant of the Gordon Ramsey empire that I’ve visited.

I was late – as usual. I wasn’t greeted by a waiter / maitre’d or manager at all when I arrived which I thought was a little odd, but there doesn’t seem to be any formal reception desk at all. They redeemed themselves from the lack greeting by asking me if I wanted a drink within seconds of me sitting down – a quality I love and wish all restaurants would do. While waiting for me The Boyfriend had worked out that there wouldn’t be that much of a difference if we strayed from the ‘Spring Menu’ at £18 for 2 courses and £22 for 3 courses. So I duly strayed.

My starter of Dorset Crab linguine was lovely. There was a good amount of chilli in it that gave it one almighty kick! And, if I’m being picky I would have liked a little Olive oil drizzled over it before it was sent out as the pasta had a slight (and it was only slight) stickiness to it. The Boyfriend’s starter of Potted Salt Beef with Cournichons was presented beautifully on a slate with a couple of bits or brown toast. 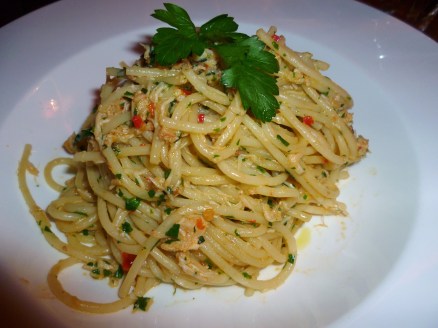 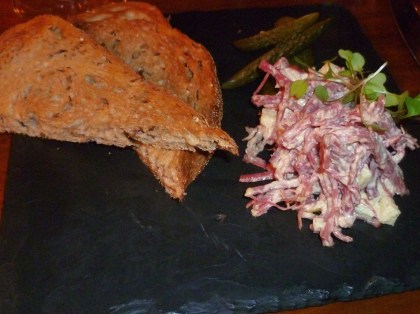 Our plates were whisked away within seconds of us finishing and the mains were brought after about 5 minutes. Again, if I’m being picky this was waaay too quick – but then as a restaurant it’s very difficult to please everyone, but I would say 10 minutes would be the wait between a starter and main – that may be just me…
I went for the fish pie for the main, it was very good – there was a whole 1 mussel in it (if I was a fan of mussels in fish pie I’d have felt rather hard-done-by, but as it happens I wasn’t hugely fussed). The brocoli was slathered in  butter which did make it slightly loose the broccoli flavour (again, if you don’t like broccoli particularly you’re on to a winner – I was a bit miffed – but I got over it). The caramelised onion tart with poached egg and my ‘Achilles Heal,’ Hollandaise sauce. The tart was lovely; what’s not to like about caramelised onions, poached egg, Hollandaise and beautifully short short-crust pastry holding it all together! As the girlfriend – stereo typically I had the wrong dish, but the fish pie really was good and even after a posh lunch I polished off the lot! 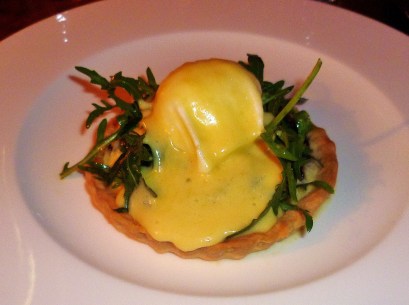 I didn’t, however, go for pudding. The boyfriend and his sweet-tooth went for sticky toffee pudding, the fork full that I had was gorgeous! It was beautifully sweet with an odd quality that made it look quite dense but once in the mouth it was light as a feather.

Coffee, green tea and the bill followed. Just over 100 quid for a pretty good meal. It’s not the cheapest meal I’ve had but it was good and there is I’m sure a certain price point that must be reached to ensure it remains in Gordon’s empire. It’s definitely worth going, the food is good and honest and I imagine a much more chilled out version of its Michelin starred sister a few doors down.