First Post!!
Grammar / spelling / writing can only get better…
I wanted to start by talking about the weather. How terribly British.
Then I thought; no, I’ll talk about why i want to write this blog. How terribly dull.
So, how does one start these things….
Who knows….
Food is what I do.
Food is who I am.
When i get bored – i think about food.

Let’s set the scene; at the boyfriend’s parents house. Le boyfriend is busying himself with his installing all the bells and whistles on his Mum’s new IPhone / putting yet more amplification into his car / fixing his Dad’s new wireless weather station so it takes a reading every 2 seconds and not every 8 seconds (because you’re going to miss so much in those 6 seconds); and me? Well I’m quietly reading the paper, surfing the Internet to find ways to make myself super rich and generally contemplating the fact that I’m not really doing anything constructive.

Here comes the food bit…. In case you were wondering.
So, I decided to raid Le Boyfriend’s mum’s kitchen and cook. she had already started to make some Seville Orange Marmalade (not the season, but remember, she’s a Mum, so she’s orgsnised and bought some oranges and froze them months ago!) so i learnt how to make marmalade. Chopping the skins of the oranges isn’t a quick job! Particularly if your boyfriend likes fine cut Marmalade. I only say that because i can’t stand the stuff but am sick of buying it for him so i thought I’d give it a go! 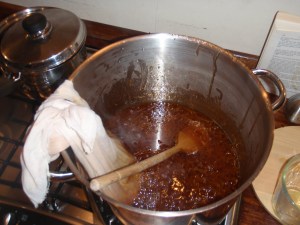 It’s actually not nearly as hard and complicated as I’d thought it was.
We used 5 Seville Oranges and 2 pink grapefruits.
A bag and a half of sugar and a litre and a half of water.
Don’t try this at home because i can’t for the life of me remember the ingredient details…
But APPARENTLY it tastes yummy – according to the boyfriend, but he has to say that!
Muffins tomorrow – once I’ve done muffins and Mayonnaise I’ll start at A and work my way through what i see as the foundations of cooking!
Let’s hope someone finds it interesting!!
xx