I love a gimmick. Especially when it’s a food related and not too expensive gimmick. I also love pasta – far too much for my own good. So when everyone started to do spiralizer courgettes as pasta I held out as long as I could. But eventually a ridiculously good looking photo on Pinterest pushed me over the edge, I clicked the link, read the blogger’s recipe and clicked the other link to her ‘weapon of choice’ for spiralizing and within 3 minutes had one in it’s way. 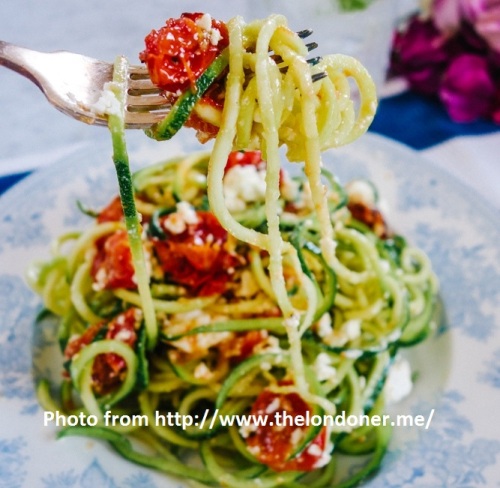 Who knows how long this spiralizing obsession will last… However I can be quite stubborn (so I’m told) and I will do my damnedest to get as much use out of it as possible! Like the pasta bit for my Kitchenaid that no-one thought I would use – big fan of homemade pasta now, or the dough hook for said machine, I’m rubbish at bread, but turns out homemade pizza is awesome. Oh and the sushi maker my brother gave us and thought we would never use – it probably gets used at least once a month.

Anyway, that was a bit of a yawny long intro. On to the recipe. This isn’t mine – it’s this girl’s ‘The Londoner.me’ except I haven’t used honey cos I don’t like honey.

The only thing I would say is that I know it’s sacrilege to use a good olive oil to roast tomatoes but you’re going to coat the courgettes in it so it’s good to have a bit of flavour in the oil.

And here’s a picture of the leftover bits from the spiralizer… just because it amused me.