With the diet well and truly on the rocks and the gym avoidance tactics at an all-time high it seemed only fitting to end last week’s week of over-indulgence with dinner at Quaglino’s. Re-launched, noisy, over-the-top and just down-right brash! The refurb has seen Quags go from beautiful but tired and in need of help to a sparkling beast of a D&D carbon cut-out restaurant with a massive bar (a la Royal Exchange / Bluebird) in he middle and staff from all over the group working to keep it going at the break-neck speed required to keep Quags on the map, namely Mickael Weiss – formally of Coq d’Argent where I had my first job in London all those many many years ago! t’s the kind of place you feel wrong f you don’t have a glass of Champagne on arrival, so we obliged and had a glass of the house  – Veuve Cliquot.

Starters – apparently I moved away from predicable Bel and didn’t order the foie gras or anything with truffle in it and had (following a few Facebook / Instagram pics from the chef) the Egg, ham and tomato fondue with Hollandaise and (oh sorry) truffle crumb. This was delicious, the egg was beautifully runny and soft with the crunchiness of the ham and the hit of intense tomato. And a beautiful looking dish too.

My friends both had the gravadlax which thy said was lovely, again it was a gorgeous looking dish.  We accompanied all this with a bottle Bacchus from Chapel Down having been accosted by the Sommelier who crept up to the table, not unlike Inapector Clusso and said with a knowing look – I know what you have ordered, and I know what would work well with your food. So he preceded to ‘aid’ me in choosing the white, whilst being ever so polite when I required something a little cheaper from his first choice.

On to the mains – again – apparently I steered from the norm and went for the mouth-watering sounding dish suckling pig belly with confit tomato, broad beans and morels. It’s not a hugely pretty dish – it’s difficult even for the artist that is Chef Weiss to make a sticky brown, rolled piece of meat look good but, and bare with me here, it was divine. The pork was so rich and sticky and sweet and salty at the same time with the morels and broad beans (the difference between Broad Beans when I was a kid and now is astounding) it was just so good. 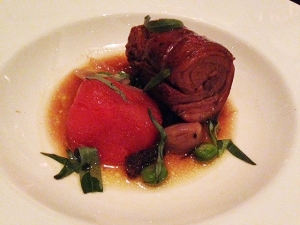 The chaps had the lamb cutlets still bleating and huge but apparently very good and the fillet steak with foie gras which disappeared from the plate so quickly and with so many satisfied noises I figured it was also a pretty bloody good dish. All washed down with a delicious bottle of The Tithing, Willunga 100 from Australia.

What amazed me after all that richness and the fairly sizeable dishes was the fact that I wasn’t too full to move… So it was only right to have pudding – and a glass of Sauternes to go with it. My chocolate marquise with crème anglaise was lovely, but to be honest, by that point after Champagne, white wine, red wine and Sauternes I can’t remember an awful lot of it apart from giving away my custard and the lovely minty hint in the base of the pud.

A final digestif of Poire Williams and we were done. I confess I didn’t see the bill, however when I heard how it was split between the boys I got the impression it was fairly large and they were glad they each had something of at least 40% proof in a glass in front of them.
It’s a stunner of a place, the food is epic and the room is gorgeous. I would go back, absolutely, totally, but not for a while, I can’t afford it.