I seem to be on a mission to eat in the old non-cool places in London, it’s not actually intentional but it’s normal. I’ve been revisiting some of my old favourites of late. Langan’s a few weeks ago, Prix Fixe was my last post and this one is about a place that I blogged about back yonder when I first started blogging – back when I had a trusty pen and paper at the table with me and used to carry round a camera in my handbag and then use the flash when I took pictures! The Ebury Wine Bar has long been a family favourite, I think my Dad had been dining there for well over 40 years – sorry dad! I met a friend there last night for a bit of a catch up, and it was as good as I remember.After a quick revitalising vodka and tonic at the bar we sat and contemplated life, the universe and the menu over a glass of Champagne.Now, usually, I would order a steak here, but as I’m trying to be fairly well behaved I went for slightly lighter options, no less rich than usual but lighter non-the-less. My starter of Crab Bisque was delicious, it’s never a pretty dish as the colour of a good bisque is such a dowdy dark orangy brown colour that if anything else was served that colour you’d probably send it back, but it’s worth ordering it, smooth and rich and totally moreish. My friend had the falafel which he said was lovely too. 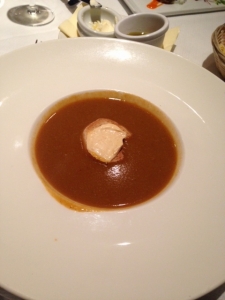 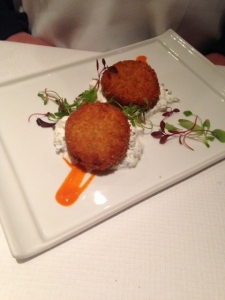 For a main I went for the ravioli that had caught my eye when I had looked over the menu earlier that day. This dish was certainly full of surprises (good ones). Again, it’s not the most beautiful of plates, the green pesto leads you into a false sense of boringness – not that pesto is boring – the thick slather of it hides the unbelievably good plump ravioli pillows beneath it. The rich creamy lemon and courgette filling was fantastic. It was one of those dishes that I found myself eating as slowly as possible so as to make it last as long as possible. Really comforting but in a posh way. 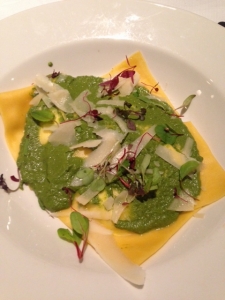 I really couldn’t fit dessert in but as my friend went for the chocolate truffon I kept him company with some sorbets, which I put a very small dent into as they were three of the largest scoops I’ve ever seen! 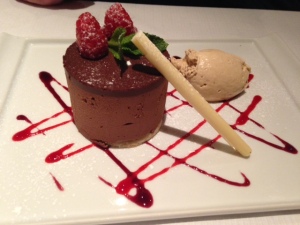 The service throughout was very good, as usual, our waitress had been working there for a good 10 years at least along with several other members of staff. And the clientele are regular, generally local and of course loyal. I go there not because it’s pushing the boundaries of haute cuisine, but because I know the food will be good, I won’t have to worry about service being weird or bad and the bill will be manageable at the end of it. So I can switch off and concentrate on having a lovey evening catching up with friends or family, that is, after all, one of the main reasons to go out for dinner! And if you still want to read more of my waffle – here’s the blog I wrote about the same place back in 2010!